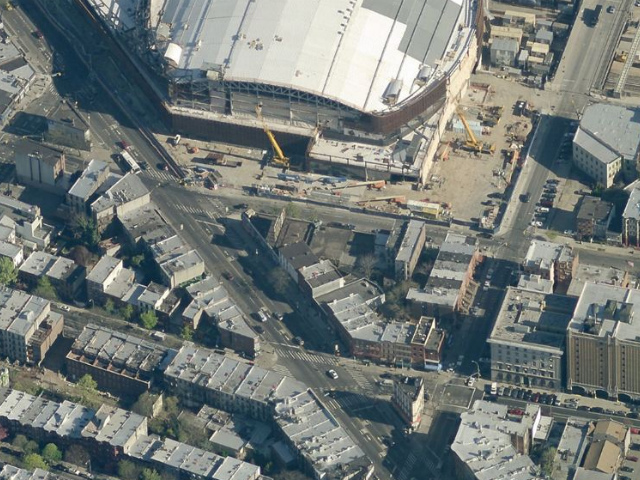 On the corner of Flatbush Avenue and Dean Street, the residential towers around the Barclays Center have started to rise, with the red and black modular units being assembled.

That project’s been halted temporarily due to a dispute between the developer and contractor, but on another corner of the intersection, a different building will hopefully soon rise: 456 Dean Street.

Permits were filed for the eight-story, 80-foot structure yesterday, revealing a 100,000 square foot residential building. The unit count given is one, which is surely to be amended – this permit, like most others filed around now, was likely rushed in order to fall under the rules of the 2008 building code, rather than the new one being rolled out next year. Mistakes – missing parking, square footages that don’t add up, zoning calculations that are way off – seem to be occurring quite frequently across filings this month.

The project’s developer is Scott Domansky of Lodz Development, and Avinash K. Malhotra Architects is responsible for design.

While the building will make a fine addition to the neighborhood, the disparity in height between this one and the one rising across the street is unfortunate. Most activists angry about the Pacific Park (née Atlantic Yards) redevelopment were incensed about (among other things) the project’s density, though this was in fact the best part about it. At one of New York City’s largest transit hubs, atop or near 12 different subway services, such densities and heights should be welcomed.

In fact, it’s the other parts of Flatbush Avenue – land such as 456 Dean – where the zoning should be changed. The lack of growth on Flatbush between Prospect Heights and Park Slope – neighborhoods that are already nearly fully gentrified – is pushing wealthier renters and buyers deep into Crown Heights, Bed-Stuy and Flatbush, in search for housing, causing displacement and high prices along the way and farther afield.