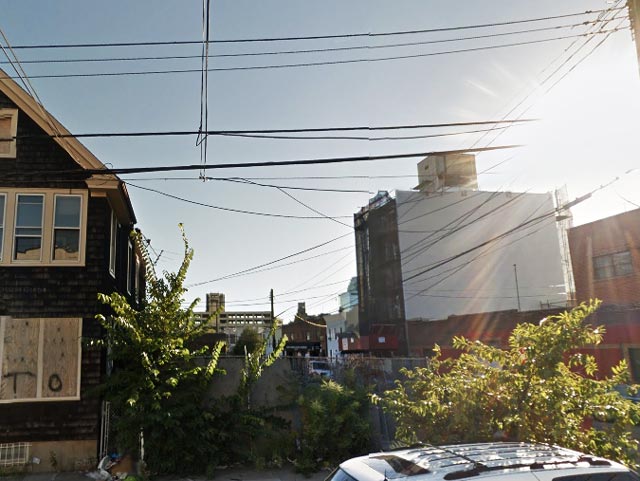 In 2008, the Dutch Kills neighborhood — situated between Astoria and Long Island City — was rezoned for residential use. The change was hardly generous, only allowing four-story buildings, but there were pockets of higher-intensity uses permitted, and at least one developer seems to have found such a site, just north of Sunnyside Yard. At 32-04 38th Avenue, Arun Agarwal intends to build a six-story, 20-unit condominium building. The rendering depicts a handsome Bauhaus-inspired mid-rise with red accents, designed by ND Architecture & Design. The structure’s early modernist influences are undeniable, down to the porthole window on the ground level (ocean liner motifs were a staple of Streamline Moderne and related styles), and well executed.

The only unfortunate part is that the ground level appears mostly blank, likely due to the need to accommodate the 10-car garage – something that can’t be blamed on the architect or developer, since that’s exactly the number of spaces required by the city’s costly and ahistorical minimum parking requirements.

With the site located just a few blocks from two subway stations (the N/Q at 39th Avenue, and the M/R at 36th Street), each of which offers a less than 10 minute ride into Midtown Manhattan, the parking minimums are woefully out of step with the city’s goals of encouraging mass transit use, and the developer is projecting at least as much demand for biking as auto use (the project will also include parking for the same number of bikes, which are not required by code).

In contrast to the huge condos planned for ultra-luxury projects in Manhattan, 32-03 38th Avenue’s 20 units will be relatively small, packed into just 13,823 square feet of space, according to a building permit filed last year. The building will also include nearly 2,500 square feet of commercial space, for a total scope of 25,200 square feet once all common areas, mechanicals and parking are accounted for.

Demolition permits for the existing structure were filed in March, and construction of 32-04 38th Avenue is likely imminent.