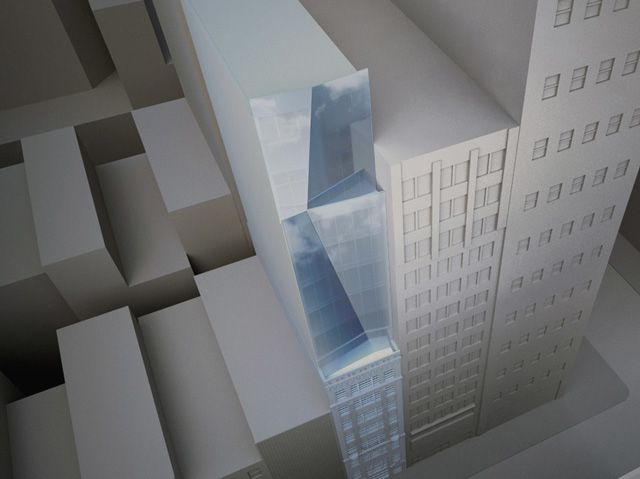 The eight-story Mercantile Library at 17 East 47th Street may be in for a vertical extension, as renderings for an enlargement have been posted to architect George Boyle’s website, outlining the possibilities for the future “Merc Hotel.”

Plans for the Merc Hotel come on the back of filings — from 2008 — which indicated the low-rise was about to see an addition. Scoping information is limited, but plans to convert the library to offices were considered, and the enlargement would have also housed offices rather than a hotel. The developer was listed as the Clinton Hall Association. Now that old plans have apparently expired, the scheme for the Merc Hotel could proceed; the building would still stand 16 stories tall — the same height as the office proposal — but interiors would be split between 56 boutique hotel rooms, with the project’s total floor area measuring 30,000 square feet.

Boyle’s plan preserves much of the existing structure, and considering the intricate facade, that is to be commended; in its current format, 17 East 47th Street is an attractive component of the streetscape. The enlargement appears to draw from Portzamparc’s work, and a “folding” glass curtain wall is sliced and diced as it extends beyond the original building. The contrast between the old and new components of 17 East 47th Street results in an attractive end-product, though whether the new plan actually translates into reality remains to be seen. Even if the enlargement is built, it will be difficult to notice, as the density of surrounding blocks is very high, and a 16-story building would make zero impact on the skyline. Nevertheless, integrating and preserving the site’s historic original structure is a major positive, and if other hotels in Midtown could take a similar tack, the neighborhood’s overall aesthetic would benefit.

Talk about this project and more on the YIMBY Forums