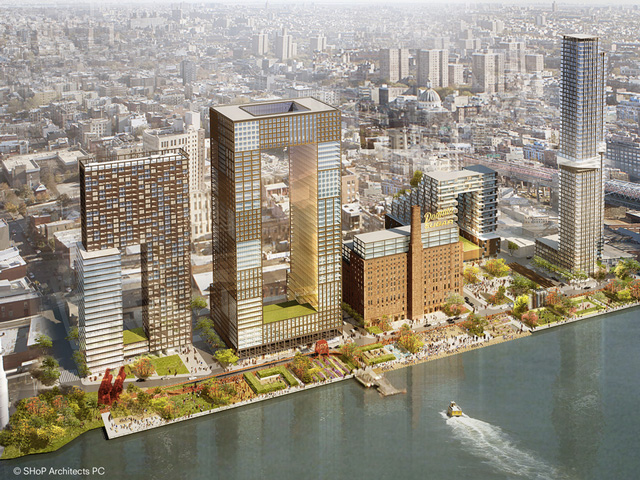 UPDATE: Per Two Trees’ reps, the permits for 2 Grand Street were filed first as the site has a substantial amount of infrastructure work that must be done. The first building to begin construction will actually be ‘Site E,’ which is the only inland portion of the redevelopment.

Now that Two Trees’ plan for the Domino Redevelopment has passed through the City Council, work on the site’s new towers can finally begin, and the first permits are up for phase one, at 2 Grand Street. SHoP is the design architect, while Ismael Leyva is serving as the architect of record. The remaining space will be split between 658 residences, and the tower will stand 35 stories and 369 feet tall. Height and affordability have both been contentious topics in the neighborhood, and ironically, many proponents of ‘affordable’ housing also favor prohibitive limits on density.

If prices on market-rate housing are to stop rising, then supply must rise to meet demand. The current state of ‘affordable’ 80/20 housing is defined by lotteries and luck, ultimately acting as a distraction from the larger problem affecting the vast majority of New Yorkers.

While the boondoggle of Domino’s final days traversing ULURP resulted in 40 additional ‘affordable’ units — for a total of 700 — the entirety of the redevelopment will still be beneficial, adding 1,582 market rate units. The relatively large bump may temporarily satisfy local demand, though the pressure on housing across Brooklyn is increasingly severe; since 2010, the borough’s population has increased by 82,558, yet only 5,358 new housing units have been delivered.

Domino is a major step in the continued riverfront revitalization in Williamsburg, and the recent push for mass-transit along the East River waterfronts of Brooklyn and Queens will hopefully come with zoning for more generous development. Domino Redevelopment, base of 2 Grand Street at far right — image by SHoP

Completion of 2 Grand Street is likely within the next two to three years, while the project’s full, 3.3 million square foot build-out may take upwards of a decade.