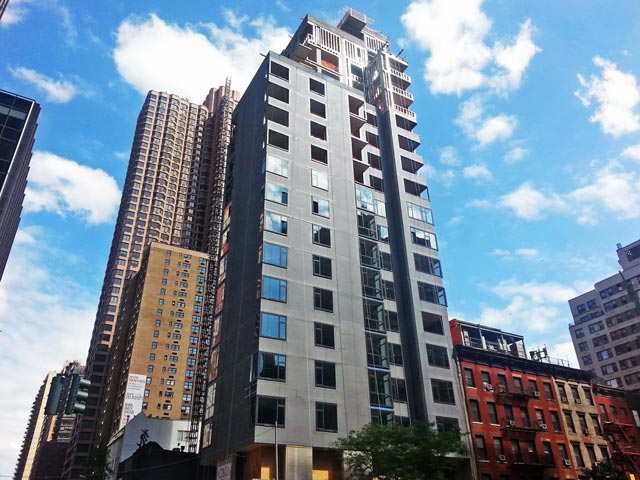 Construction has made quick progress at 200 East 39th Street — located directly on Third Avenue — and the residential tower has now topped-out. SK Development and CBSK Ironstate are behind the project, and Rawlings is the architect.

Permits reveal the 19-story building will have 91 units, and the building will have an affordable component in addition to market-rate rentals; its entirety will measure 74,475 square feet, including 3,754 square feet of ground-floor retail. The total height will be 213 feet, and Curbed has a recent rendering, which gives a better idea of the project’s ultimate appearance. Excavation only began one year ago, which is impressive considering how far the site has come; windows are now being installed, and the exterior looks to have been painted. Renderings indicate a more detailed facade will eventually be added, though whether that actually happens remains to be seen.

All considered, 200 East 39th Street is not awful, though the design is certainly nondescript. The 91 apartments will make for nice filler, and at the very least, the built envelope enhances the block’s urban feel, as well as the Third Avenue street-wall.