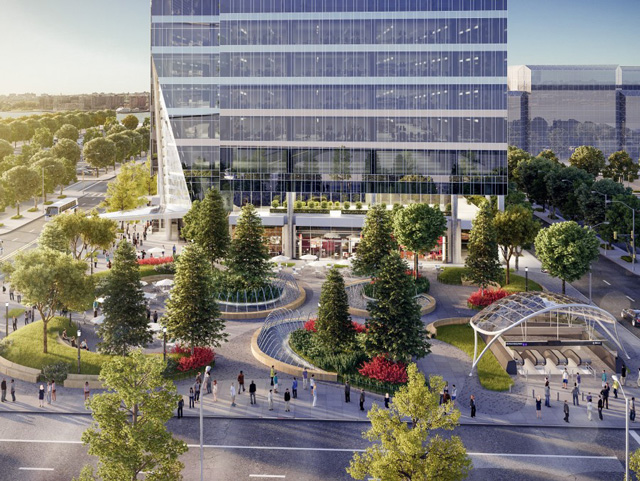 UPDATE: A rep for Moinian sent along information noting that the above renderings are incomplete, and do not portray the most recent iteration of 3 Hudson Boulevard; the building will also measure 1.8 million square feet, including 1.5 million square feet of Class A office space and 300,000 square feet of ‘upper floor space’ that could serve several purposes. The ‘Girasole’ moniker is also dead.

While Related’s new towers at The Hudson Yards have been receiving significant attention, 3 Hudson Boulevard is also about to begin construction, and new renderings give a better look at the tower’s base, as well as its overall profile. The images come from the official site and Real Estate Arts; the project’s developer is Moinian, and the architect is FXFOWLE.

The landscaped base of the 1.8 million square foot tower will open directly onto Hudson Boulevard, which will become the pedestrian spine of the re-developed neighborhood; while the first components of the 7-line extension are about to open, the image gives a better glimpse of the actual park, which is currently being sculpted. Fountains and trees dominate the layout — as well as the actual subway entrance — and the resulting green space will offer a pleasant respite from the hustle and bustle inside neighboring office towers. 3 Hudson Boulevard’s base is also depicted in the images, and the park-facing side will be simple and modern, with little flair; the tower’s most iconic aspect will be its height, as it will approach the 1,100 foot mark. 300,000 square feet at the top of the building will be dedicated to condominiums, and Curbed has the run-down on those details in a post from last year.

Real Estate Arts’ nighttime rendering of the project gives a better idea of the project’s scale, which will be impressive. The form’s twisting motion adds to the tower’s vertical momentum, and as it rises, walls are whittled away, leaving the skyscraper to crest at an angular peak. The southwest corner of the base offers a marked departure from the side facing Hudson Boulevard, with a louvered facade that almost seems to mimic One World Trade Center.

Construction on 3 Hudson Boulevard is expected to begin this year or next, and 2017 is the project’s tentative completion date.