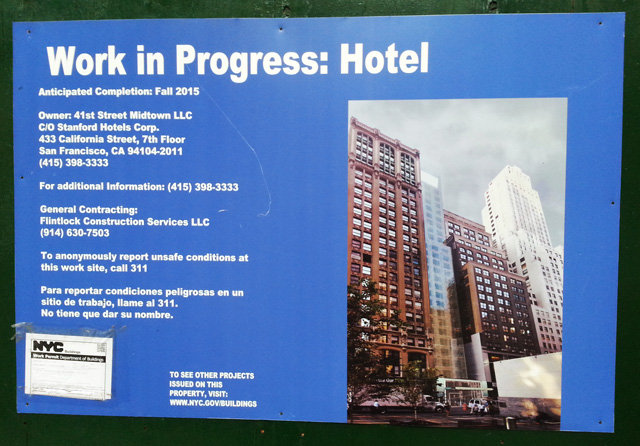 Work is beginning on a new hotel at 120 West 41st Street, one of several new developments rising on 41st Street. Permits indicate the structure will stand 26 floors and 257 feet, and contain a total of 130 rooms. The posted design is very plain; the new building will be a transparent glass box that also breaks the street wall. Though the cladding won’t be gaudy, the form will detract from the typical density of blocks in Times Square, and the quality of the project does not appear to be in line with the general surroundings, which includes icons like the Bank of America Tower, and the also-under-construction 7 Bryant Park. 120 West 41st Street’s architect is Peter Poon, and the developer is Stanford Hotels. Completion is expected in the fall of 2015, and while a stop-work order currently exists on the site, a round of permits were recently approved, signaling that work is imminent.

YIMBY Checks Out the Views From TSX Broadway at 1568 Broadway in Times Square, Manhattan

TSX Broadway Tops Out at 1568 Broadway in Times Square, Manhattan