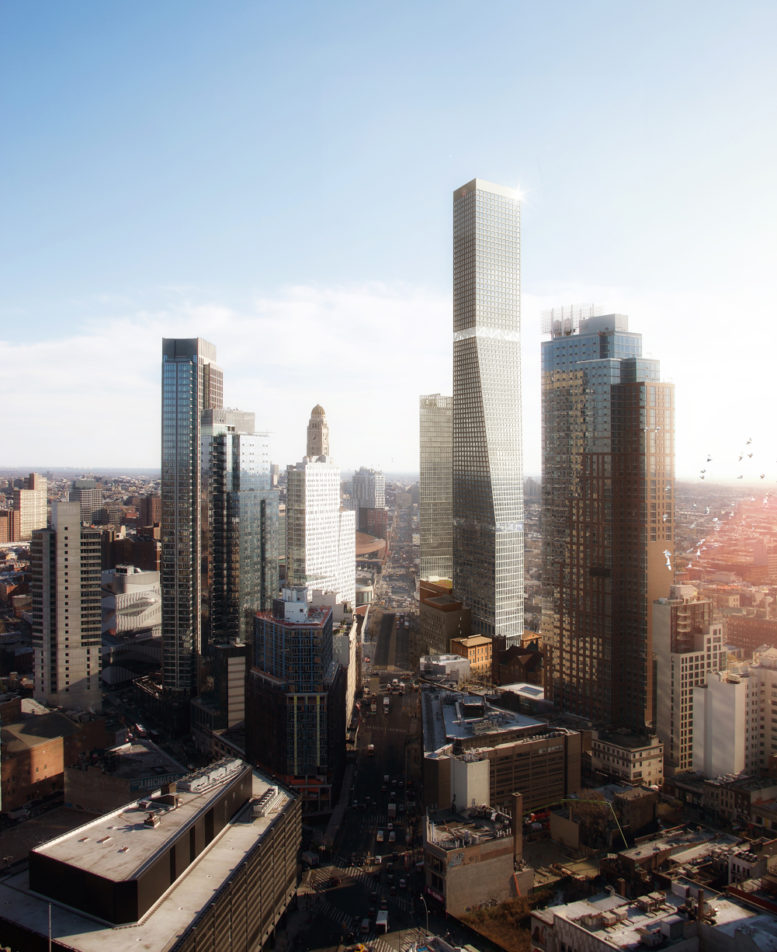 80 Flatbush Avenue will not be a destination for oligarchs. It will house over 900 new apartments atop two brand new schools and retail space. 200 of those units will be designated as affordable. The arrangement will provide housing for humans, and opportunities for both adults and children, including the relocated Khalil Gibran International Academy. It is also located directly across the street from what was Brooklyn’s tallest tower from 1929 til the early 2000s. The scale is proportional to the surrounds, which include plans for a supertall at 9 DeKalb Avenue, just a few blocks away. The intention is positive, and the plan is attractive. There is no problem with 80 Flatbush Avenue.

There most certainly is a problem with the people who would cast a burgeoning neighborhood in amber, just as its actual potential begins to be reached. The West Village is proximate to just about every subway line in the Five Boroughs yet it has remained a graveyard of nineteenth century architecture despite the amount of capital all New Yorkers have paid into the development of its infrastructure. The area surrounding 80 Flatbush could be subsumed into a similarly Disney-esque and under-built state relative to its potential, if the actions of the moneyed few are not met with resistance from everyone else who stands to benefit from an imminent proliferation of new apartments, jobs, and opportunities for schooling their children.

While moneyed NIMBYs often use local community boards to oppose development, putting the fight online is a way to allow a larger proportion of the community to contribute to discourse. Public meetings require participants have free time to spend in the first place, which is why the most vocal opponents of development are typically those whose accumulations of lifelong privilege afford the ability of partaking in vociferous pointless discourse when other members of the community are busy working or caring for families.

This accumulation of privilege is lacking in most neighborhoods composed of people who work, which is why places like Greenwich Village have been cast in formaldehyde while places like Greenpoint and Bed-Stuy have continued to evolve. The democratizing effect of the internet is one way to mitigate this gaping chasm of representation, and in the case of 80 Flatbush, it has proven that the NIMBYs are set on ignoring widespread public support, revealed in their own poll. 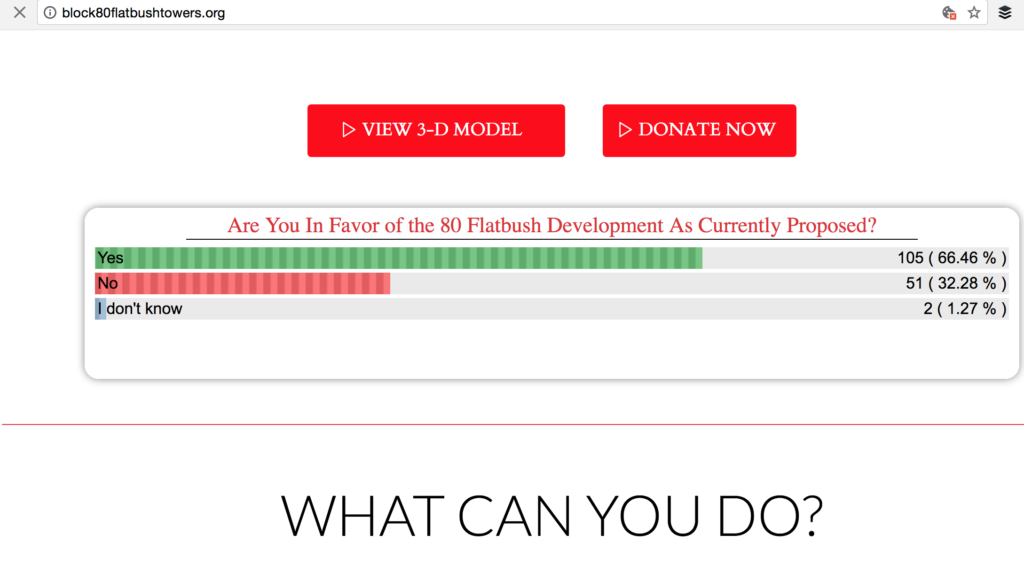 The removal of the only measure of public opinion from the website of 80 Flatbush’s opponents is further confirmation that these NIMBYs have no interest in serving the public good. It does not matter that the surrounding community supports the towers. In fact, this is verification that the selfish interests of the privileged figures at the center of the group are all that matters.

America’s regressive politics do not start in the Midwest or the South. When New Yorkers look to the reactionary opinions fomenting elsewhere, too often, expressions borne from desperation are conflated with convictions perceived as absolute ignorance. But New Yorkers know better. Or at least, they should. Brooklyn’s educated NIMBYs are fully versed on the politics of displacement, they know that segregation is wrong, and they know the impact disenfranchisement has on those whom it does not benefit. Yet, they continue their campaigns of obfuscation, which have the singular goal of keeping newcomers out of their neighborhoods, and maintaining a status quo from which they alone benefit.

The definition of deplorable is “deserving condemnation,” and in the case of this behavior, no description would be more appropriate. As NIMBY outrage frothed from the same logical conclusion in a recent post on similar tactics deployed against 200 Amsterdam Avenue, it further confirmed a worsening reality in New York. The destitution that has become increasingly prevalent across the Heartland is, in fact, a direct outcome of what has happened in this country’s cities, from coast to coast. Even in supposedly blue states like California, housing equality is an issue fought against tooth and nail by the very same people who cast blanket-labels against anyone who can’t afford and benefit from the artificially-inflated cost of housing in metropolitan cores.

Politics are inherently based on perceptions of what constitutes a group’s self-interest, and said group then acting upon that interest. This is why actions based on a desire to exclude, deny, and deprive other American citizens of comfortable habitation so that costs can continue to be artificially inflated for those who profit from the housing shortage are morally reprehensible.

Deplorables do not start in the South or the Midwest. Just as fashion, food, and culture are exported from cities to the heartland, so are hatred and desperation. Correcting the problems that have begun manifesting so negatively across so much of this country demands dealing with their root cause. And that cause is the reprehensibly regressive bottom-line championed by NIMBYs who would delete and pretend a poll they themselves created never existed, rather than acknowledge that New Yorkers do indeed support new skyscrapers in Central Business Districts.